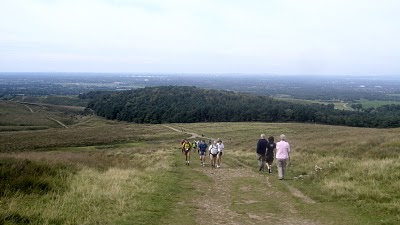 15 years, 14 starts, 13 completions and now, in 2010, the year of injury and niggle, I go and get my first ever sub-12-hour finish. WOOOO-HOO! That was unexpected!
Until a week or two before this event I thought I would not be doing it. I was supposed to be away on business. A busy month of Runfurther races made me think it would be unwise to do it anyway because I know what I'm like. If I'm doing an event I feel driven to give it my all, especially on this, my first and most-run event. That would risk diminishing my performance on the races that supposedly matter more – Pumlumon Challenge 26 next week and High Peak 40 the week after.
Well, the business travel was delayed until October and I could not resist the temptation. I handed in my entry in person on Monday (it's my local event) and I booked an impromptu day's holiday on Wednesday to reconnoitre the final 22 miles from Earl Sterndale to get some exercise in the legs. The day was very warm and I probably drank too much electrolyte. It left me feeling far too wasted for comfort. I got a couple of good nights' sleep to sort myself out and I rolled up at registration on Saturday feeling surprisingly chipper.

The weather had been dry and warm for a good while and the forecast was just about holding out. Conditions could not have been better – not too warm, not too cold and dry underfoot. The turn-out was impressive and thought to be a record since the start of this event in 1976 – quite impressive considering it's not part of the Runfurther series. It just goes to show the increasing popularity of ultra trail running. I would wager that the Internet and blogs such as this pique runners' interest, they have a dabble and, once dabbled, they're hooked. A case in point is my fellow Stockport Harriers. We had a big turn-out last year. They dabbled. They became hooked. They came back for PBs. They conquered. They will want to return next year for more PBs. I know. I've been at it for 15 years and I still want more.

Anyway, the anvil was struck in Devonshire Park at 12:01 and I set off with a surprisingly large number of other runners along the alternative route along the main road, left up Towers Road and left across the fields towards the golf course. This might have saved a minute compared to the route I'd always taken since 1996.

I settled into a pace that I hoped I could sustain. Using the Lincoln University medical research results from last year, I had to keep my heart rate around 165bpm for maximum endurance without blowing up. It only peaked towards 175 briefly during my early exuberance, but it was not long enough to do any harm. I found myself already slipping behind my PB schedule of 2007 by the first checkpoint at Bowstones. I expected it and wasn't worried. I knew I couldn't be as fit as I was in 2007. I just had to make the best of what I had in 2010.

The descents down to Chinley Churn, to the valley before the slog up to Edale Cross and down Jacob's Ladder were slower and more painful than usual thanks to the knee. By the time I arrived at CP4 (Edale, 17.4mi.) I was around 10 minutes down on my PB schedule. Not too bad, I thought; still redeemable. This deficit remained constant, give or take a few minutes, for the next 25 miles to CP11 (Cumberland Cottage, 42.6mi.): even more promising. I was holding my own.

As is often the case during ultras such as these, I found myself running alone quite early on, while leapfrogging back and forth with other runners of a similar pace – Mark Dalton, Geoff Pettengell (another BSH veteran), Julian Brown & Jo Miles (Julian ran the Grand Raid Pyrenees on the previous weekend!), Amanda Calvert and Stephen Watts with son Alastair (Stephen ran the PTL on the previous weekend!!).

I was fuelling myself with Coke, which supplemented the variety of food from the checkpoints, so I was able to sustain a decent pace after the initial slower start. There were crisps, jam sandwiches, bananas, soup & bread.

The orange segments at Peak Forest always bring the child out in me as I do the big orange gum shield impersonation, sometimes in public as I run up the main road towards Miller's Dale. Come on, own up, I bet you do it as well.

As I ran across the fields of lush green pasture towards the road into Wheston, I caught sight of a flock of sheep being driven along the lane to my left. I knew what was going to happen, and it did. I couldn't outrun them. Our paths met at the point where I emerged onto the road. I waited while the two sheepdogs guided them into a field just before the farmer's vehicle that was stopped across the road ahead. The dumb animals were having none of it. They shot out of the gateway again, squeezed past the vehicle and continued down the road. The farmer growled his commands to the dogs, who duly obeyed and chased off down the road to fetch them back, which they did except for one. When the remaining sheep realised it was alone, it galloped up the road like a horse, past me as I dutifully stood to one side, to rejoin the flock. I have never before seen (or heard) a sheep run so fast.

Back to the food. The jam doughnut at Chelmorton was eagerly scoffed. I was ready for it but I remarked to Julian and Jo that either it would make me sick or it would fuel me well. Fortunately the latter proved to be the case. All fears of nausea had vanished by the time I was running across the fields via those nice new hand gates on the approach to Earl Sterndale.

The hot dog at Brand Top was also eagerly scoffed, and again nausea never featured as I adopted the most efficient ultra-running lope I could muster along the road to Knotbury, now by the light of my head torch. Amanda, Steve and Alastair chose the field route to the right up to Hilltop. Although it appears more direct on the map, it involves more climbing and proved to be marginally slower than my more runnable road route.

Now into darkness the night remained mild, calm and dry and I was still glistening with perspiration whenever the breeze dropped. My daytime attire of vest and shorts would not be added to. I set off from Cumberland Cottage in pursuit of Steve, Alastair and Mandy, who had left with barely a pause. They were out of sight but they couldn't be too far away. I began to make up time for the first time. The Coke was doing its thing and keeping the legs fuelled like never before. As I arrived at CP12 (Walker Barn, 46.9mi.), the other three were just leaving. I'd clawed back good time. A quick refuel and I was off on the descent (with a bit of up) to the final checkpoint at Whiteley Green (51.1mi.). For the first time I'd been able to run the entire canal towpath and I'd caught up with my three targets before we'd hit the checkpoint. I'd made up more time but I was still 5 minutes behind my PB schedule. I would need to knock 12 minutes off that on the final leg to get a sub 12. “Impossible”, I still thought to myself. I'd said to Steve earlier: “If I think I can get a sub 12 I'm living in cloud cuckoo land. Sub 13 is far more realistic."

I began to fantasise and cuckoos and clouds started to flood my thoughts as I set off running along the Middlewood Way in the lead. It wasn't long before the other three overtook me and slowly disappeared into the distance. I carried on running to the best of my ability (yes, I was still running and quite unbelievably it was feeling relatively comfortable and painless). I slowly overtook another runner before the left exit at Bridge No. 12 at Wood Lanes. I carried on running, zigzagging right-left-right along roads, tracks and footpaths to the top of Towers Road. I was still running as I exited that interminable drag onto the main road. I checked my watch and caught my breath – only 10 minutes to midnight. I picked up the pace up the slight incline past the garden centre. I wanted that sub 12 and feared that the final road section would take more than 10 minutes. I needn't have worried. I hit the timekeeper's desk 11 hours and 56 minutes after I'd set off (rounded up to 11:58 by the uncharacteristically inaccurate BSH timekeepers). I had gained 15 minutes on that final 5.3-mile section. Steve, Alastair and Mandy had finished very strongly, 4 minutes ahead.

I finally achieved what I honestly thought was beyond me now even if race fit. I'd gained everything on the final three sections (around 14 miles). I was able to run all the way to the finish for the first time in my life. I actually felt like an ultra runner for once instead of an ultra plodder. The running flowed so freely and painlessly it seemed unreal, like the most perfect dream. Furthermore I did not feel trashed during or afterwards. Good hydration and fuelling have to be the reason. I drank 1.5 litres of Coke along the way.

There were some impressive performances. Mark Ollerenshaw was first male in 9:05, followed by Ian Symington in 9:14 and Steve Temple in 9:42. (Steve provides the amazing results breakdown and analysis.) Sally Keigher was first female in 10:35, smashing her own record of last year. She finished equal 6th with a load of other Stockport Harriers. There was a very strong field this year. I finished 30th, which is considerably lower than in previous years despite my PB, another indicator of the strength of the field. Ultra running is certainly on the up in the UK. How good is that?

The post-race chat in the dining hall was as entertaining as ever as we compared notes and shared a couple of cans of beer that Tony Audenshaw had left behind. He said we could before he left. Thanks Tony, it was still nice and cold and it went down a treat. Isn't it interesting how alcohol has no effect on the head when the body is still craving energy after an ultra.

Worrying was the news that a walker was still missing between Edale Cross and Edale, the checkpoint outside Edale Village Hall having eluded him. Mountain rescue trackers and a helicopter had been called out for the first time in the event’s history. Thankfully he was eventually found, by which time he must have been very hungry and thirsty. That 3.6-mile section had taken him over 9 hours of wandering up and down! It sounds incredible but apparently true.

I took a few pictures – fewer on route than I would have liked because I was trying to push the pace a little.

Nigel Aston always writes a very good BSH account. This year's can be found here.
Posted by Nick at 19:29