Race 2 of 12 in the 2017 Runfurther ultra-running championships.

A large turn-out of keen runners descended on Sowerby Cricket Club for the third and final running of this route. Speedy names and faces I recognised at the start included Ian Symington, Kevin Hoult, Daniel Page, Chris Davies, Nicky Spinks and Karen Nash, to name but six. 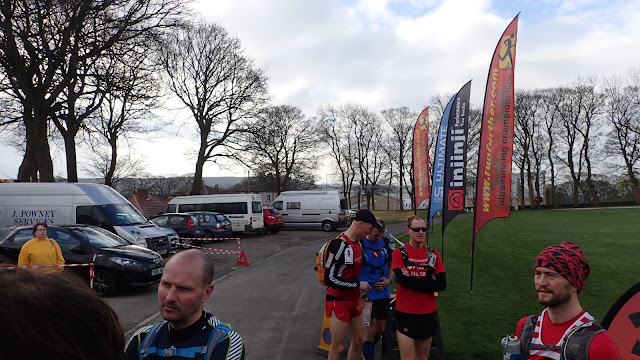 Dry weather for over a week would give way to a morning burst of rain just on Saturday. I expected it to be already with us by the 9am runners’ start but it was delayed by 2 hours. We even enjoyed broken sunshine for a while. The sun was just about shining on the approach to CP3, Ryburn Reservoir, 4.6mi. I was chatting with Jerome McAllister, who reminded me that we finished the Bullock Smithy Hike together in 2015 and that he’s planning to do The Spine next year after completing The Spine Challenger (the first 100 miles) this year. Rather him than me. I could never take on such a daunting challenge. On the climb towards CP4 he left me for dead, never to be seen again (he finished 22mins ahead). 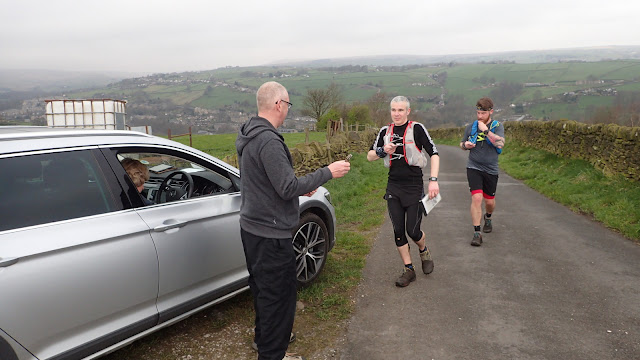 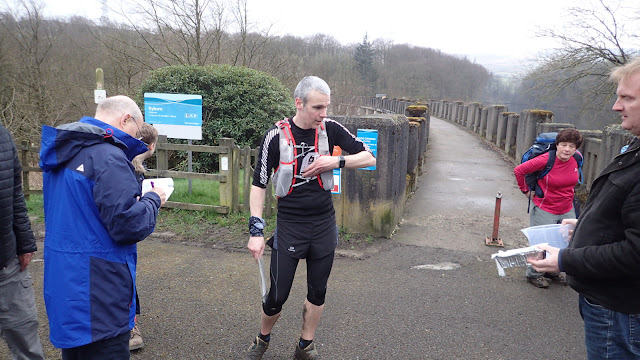 The rain finally hit at 10:45 on the approach to CP5, Windy Hill, 9.7mi. and was gone well before CP6, White House, 12.8mi. As the rain began to spit with a black pall looming ahead, I stopped in a sheltered spot just before emerging onto the road to put on my lightweight Montane Minimus smock – a rather useless garment that passes all rules with its taped seams but has always lacked any semblance of waterproofness. However, I knew it’s all I would need today. As I did this, a group of runners including Mick Cottam and Ian Hodge overtook me. They didn’t take my cue. I knew they’d soon regret it; I knew what was coming.

The rain was driving in heavily as we climbed to the checkpoint via the most direct road route. I watched those in front struggling with their rucksacks and jackets to don rain protection on the move when already wet, while I happily trotted up the road, dry for the moment in my own temporary cocoon, until the seepage would make me as wet as they already were.

For the first time, I had my map and compass tucked away in my bum bag. I knew exactly where I was going. My last reconnoitre of a week earlier had pioneered a final route optimisation between CP7 and CP8 that avoided the turbine moor. It was much quicker and more runnable.

We soon became very spread out and sightings of other runners became less frequent, with me catching and overtaking earlier-starting walkers, and runners (who had started at the same time as I) doing the same to me. I always slow down. I was just keeping Mick and Ian in sight from CP5. At CP7, Sladen Fold, 14.5mi. they were just leaving as I arrived. I gave chase to see which way they would go. Mick turned left to take the turbine moor route. Ian followed somewhat indecisively after appearing to change his mind and direction. I carried on along the canal towpath for a few miles towards Walsden to take the climb through Ramsden Woods. Trouble is, the ability to run had all but deserted me now. I struggled to shuffle my way along as I watched two other runners who had chosen the parallel road route slowly pull away from me.

The climb through Ramsden Woods was steep, picturesque and relatively short and it delivered me to another lane that was once again runnable all the way to CP8, Coolam, 18.9mi. Mick arrived at the same time as I did, from the opposite direction. In view of my serious slowdown, he would have been a long way ahead had we taken the same route. He went ahead and was soon out of sight. As for Ian, there was no sign. I assumed he was ahead and out of sight too.

As in previous years, my slowdown continued, with running feeling like the most unnatural thing in the world. As usual, I had to take walking breaks along the perfectly runnable Limers Gate. Having availed myself of sandwiches whenever available at the checkpoints, I grabbed another one at CP9, Slate Pit Hill, 21.6mi. Let’s see if that would find its way into the legs.

The descent to Cornholme through the mountain bike woods was lonely, muddy and treacherous, from slipping down in the mud and risking crashes with barely-in-control cyclists. At the bottom in Cornholme, I caught up with a group of walkers – known LDWA stalwarts – who then proceeded to leave me for dead on the next climb towards Mount Cross. The sun was now out and it was getting rather warm, just like in previous years. I didn’t catch up with them until 5 miles later near the road crossing in Todmorden. Two checkpoints had passed in the meantime. 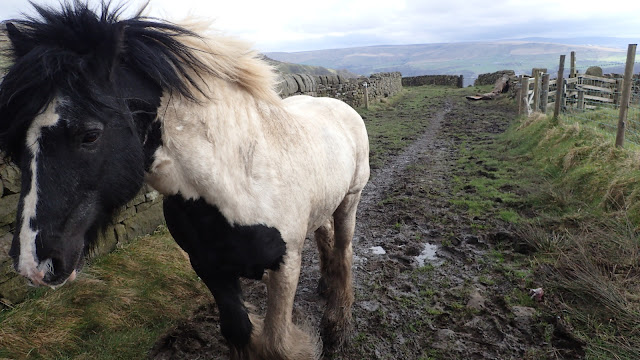 By now my body was finally cottoning on to the fact that all this food I was eating needed to be delivered to the legs to sustain forward motion at a pace that’s not too embarrassing. I powered my way (relatively speaking) uphill to CP12, Lumbutts Church, 28.7mi. and then on to CP13, Erringden Grange, 31.7mi. I had found my equilibrium at last. 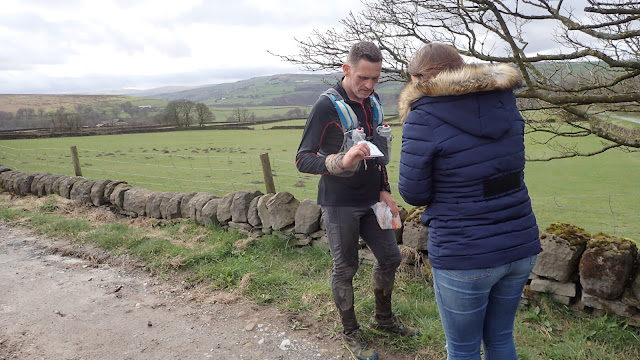 A group had just overtaken me and I wanted to see if they would take the detour via Mytholmroyd with its excess descent and ascent. They kept having walking breaks when I wanted to run, but I held back just enough at a discreet distance. Lo and behold, they turned left downhill on their wild goose chase and I ploughed straight ahead in the direction of Hoo Hole, where lo and behold for a second time, I happened upon Mick Cottam. He mentioned something about a sore foot that must have been holding him back on the steep descent. I overtook him but he had me good and proper on the steep, oh so steep climb towards the final checkpoint, CP14, Nab End Quarry, 34.5mi. He was soon gone to finish 4mins ahead.

My new target was now Nigel Ainsworth, who was running along the track as I climbed towards it. I gave chase out of CP14, expecting to be on the losing end of a tussle to the finish. However, this time it was my turn for a rare dose of glory. My tank had something in it for a run all the way downhill to finish in 8:10, while Nigel must have been running on fumes at that point. He came in just 2 minutes after me. Good effort Nigel after taking the long way ‘round via Mytholmroyd. 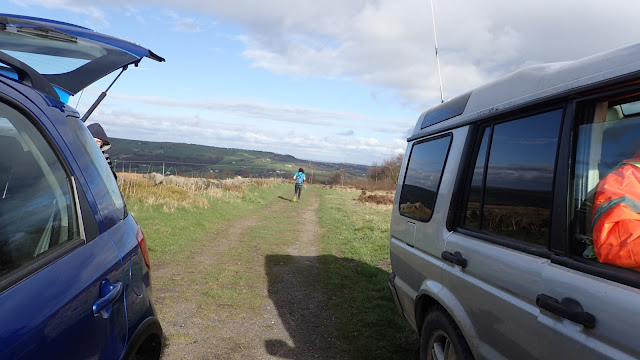 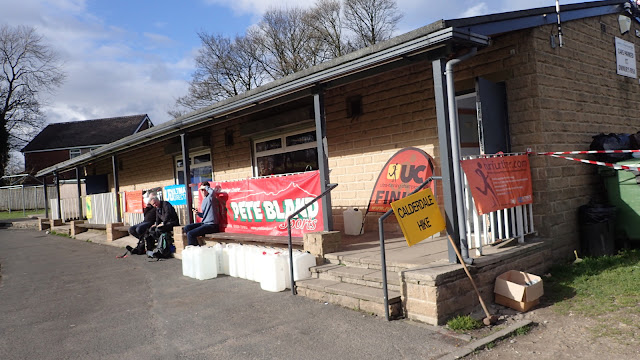 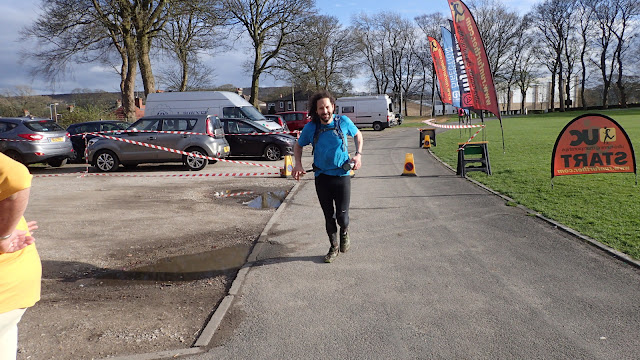 As for Ian, he was not ahead after all. He finished 55mins after me. There were navigation issues on the turbine moor, which is not surprising given the fact that this was his first attempt at this route. I had seen the warning signs with his floundering after Sladen Fold. The Calderdale Hike does need to be reconnoitred if you want to avoid frustrating walkabouts.