After the hypothermic hiccup let the PBs continue....

This early May bank holiday weekend sees a welcome return of Des Gibbons' 3-day Glossop running festival. It's my 4th consecutive year on the triple challenge.

Coolest conditions I've experienced so far but the ground was still dry. The closure of The Grouse Inn meant registration in a mini tent city on the sloping starting field. Some of us were thankful for the tents' shelter from the cold breeze before and after the race.

This is one tough, steep fell race that gets the heart and lungs bursting out of your chest and gives you tunnel vision through brain starvation (I'm not joking). It's short enough to push beyond the limit from beginning to end. I did and continued my string of PBs since 2012. The 2 minute improvement was an even bigger surprise. 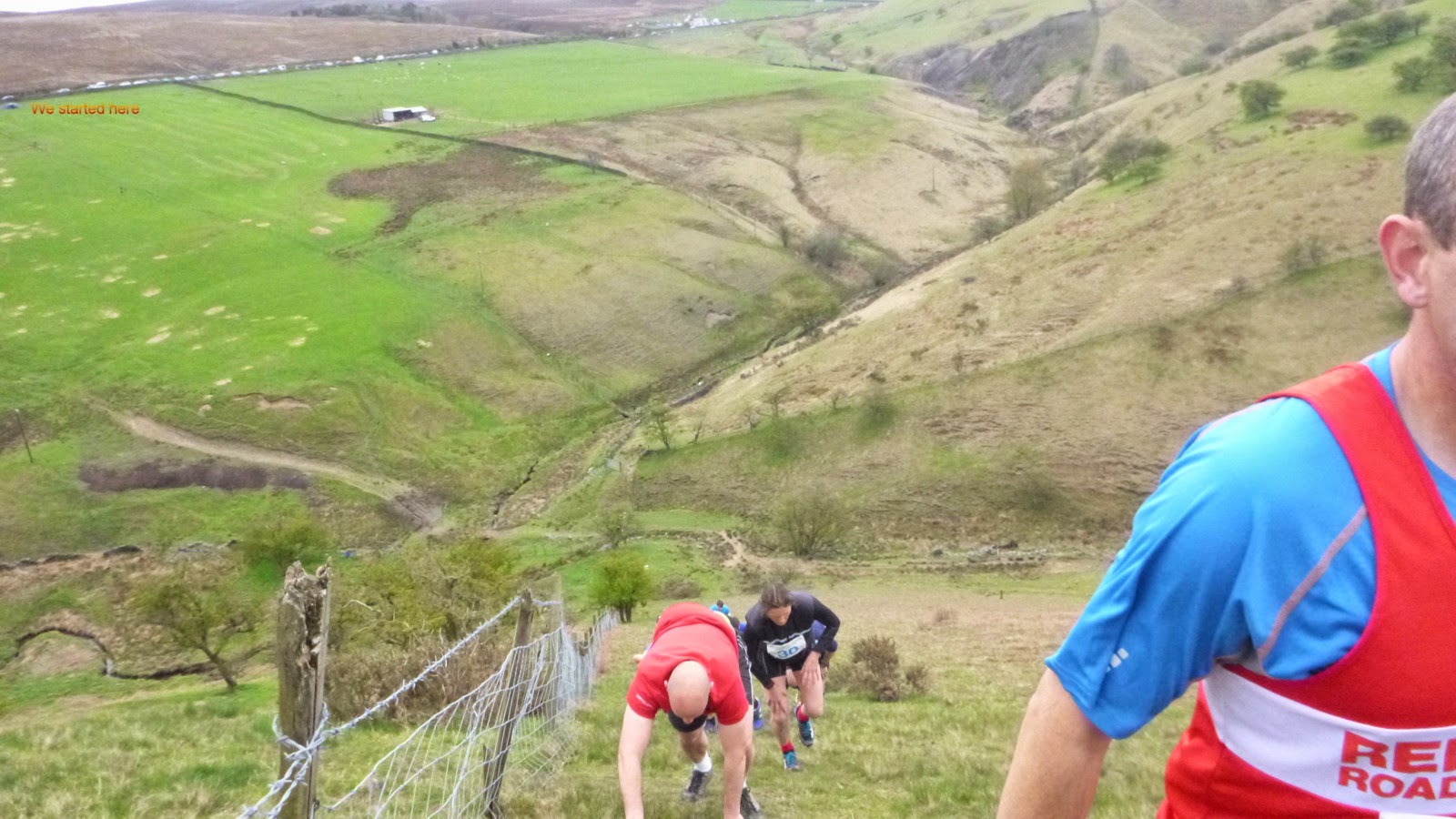 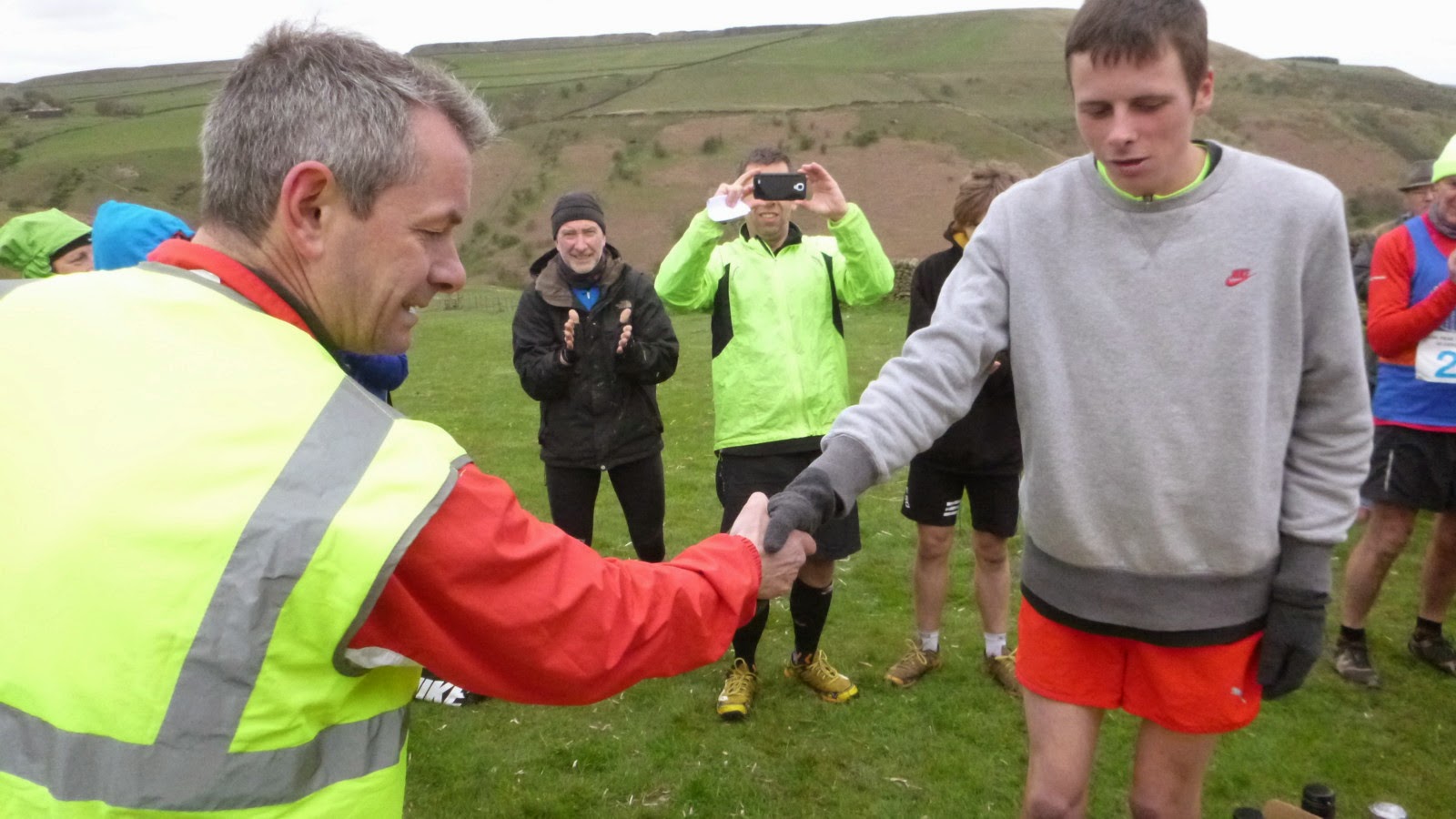 Jack Ross beat his own course record by 52 seconds.

Overnight rain stopped in time but its passing introduced much warmer, humid conditions. The sun came out to add to the discomfort as we powered our way on the anticlockwise hilly route. The sting in the tail before the finish doesn't get any easier. I have to walk it before the gradient eases off to allow the pace to be picked up to the finish line and another PB. Don't know how many more of these I can muster. 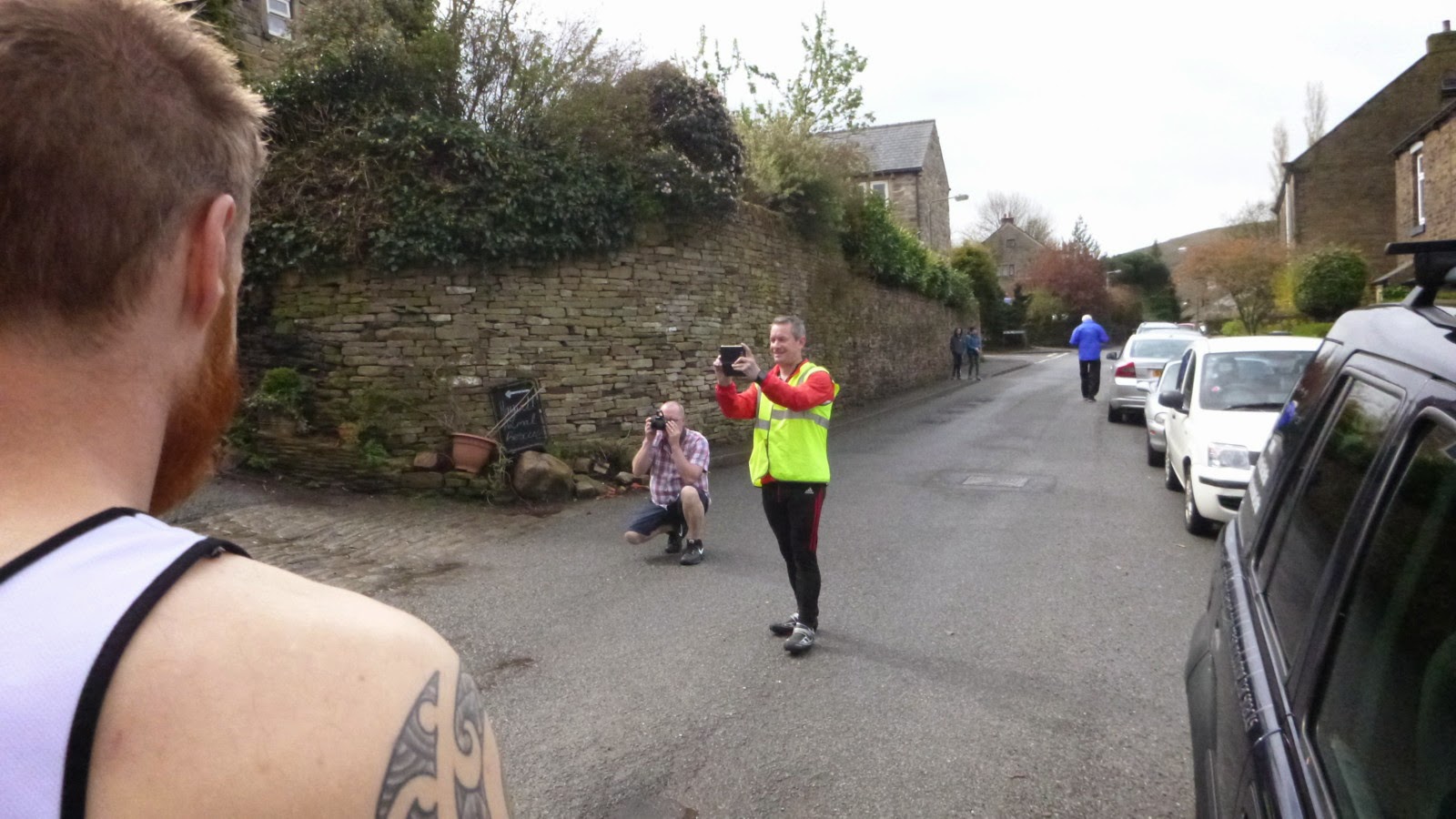 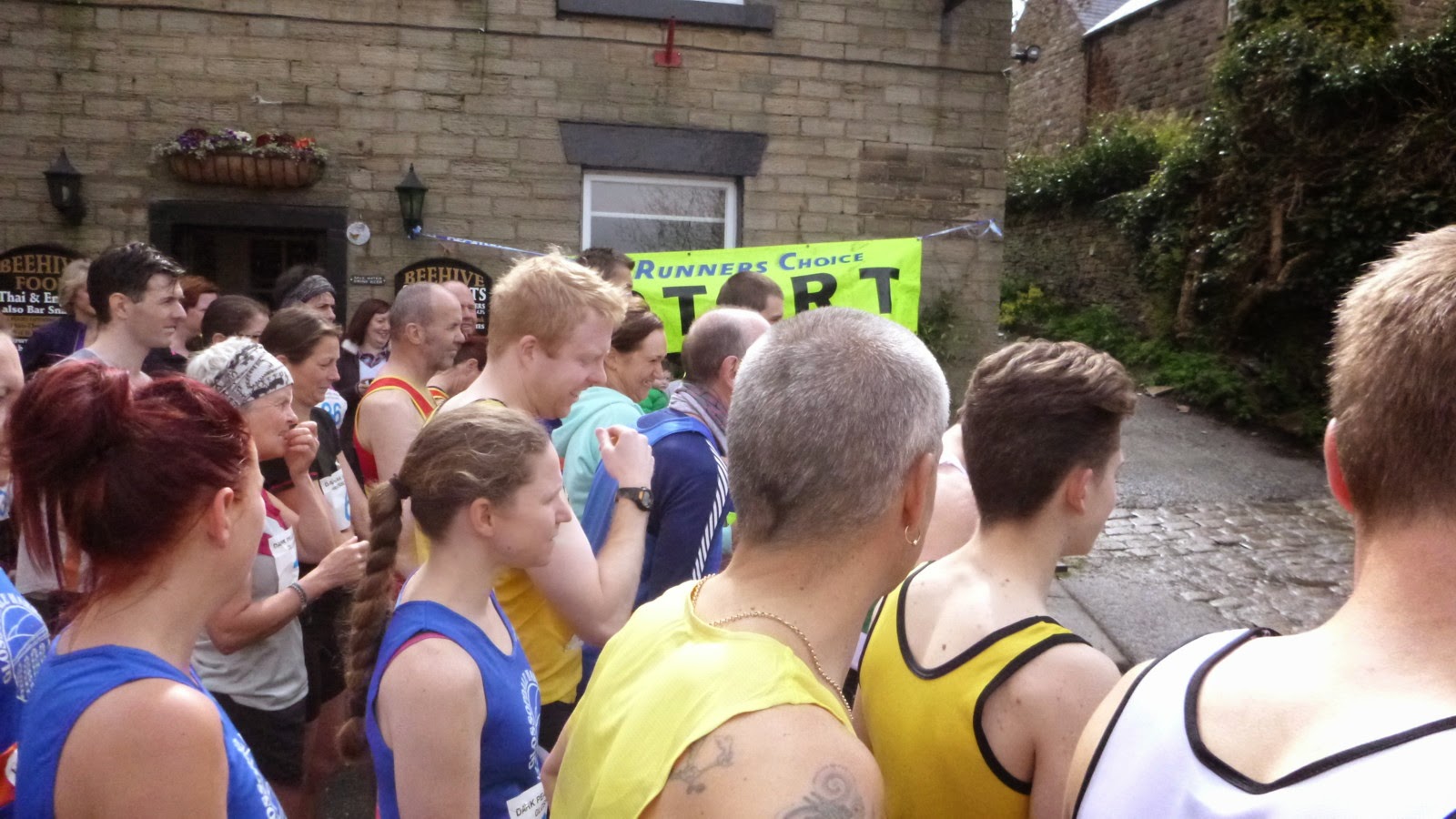 On the starting line. 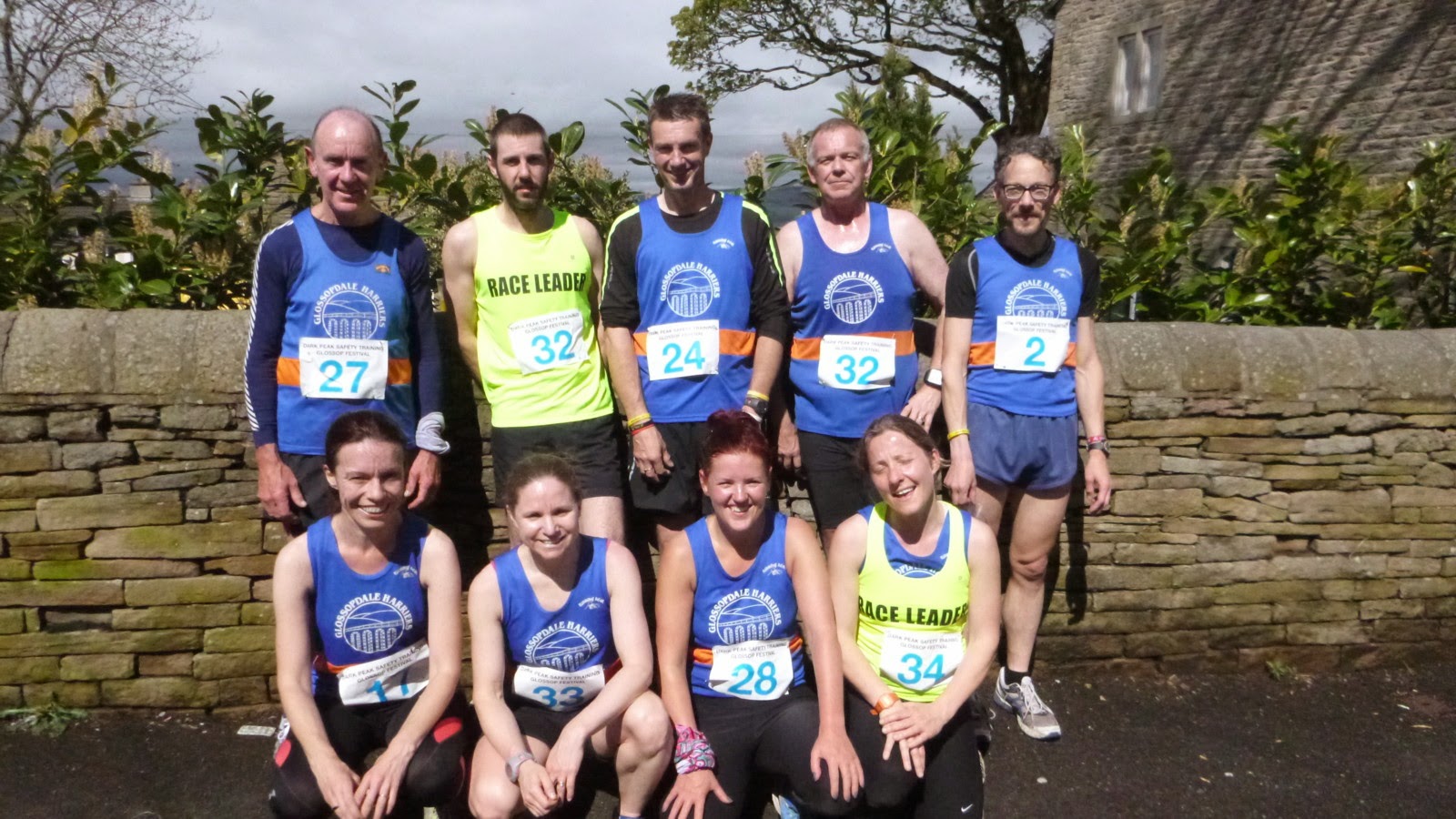 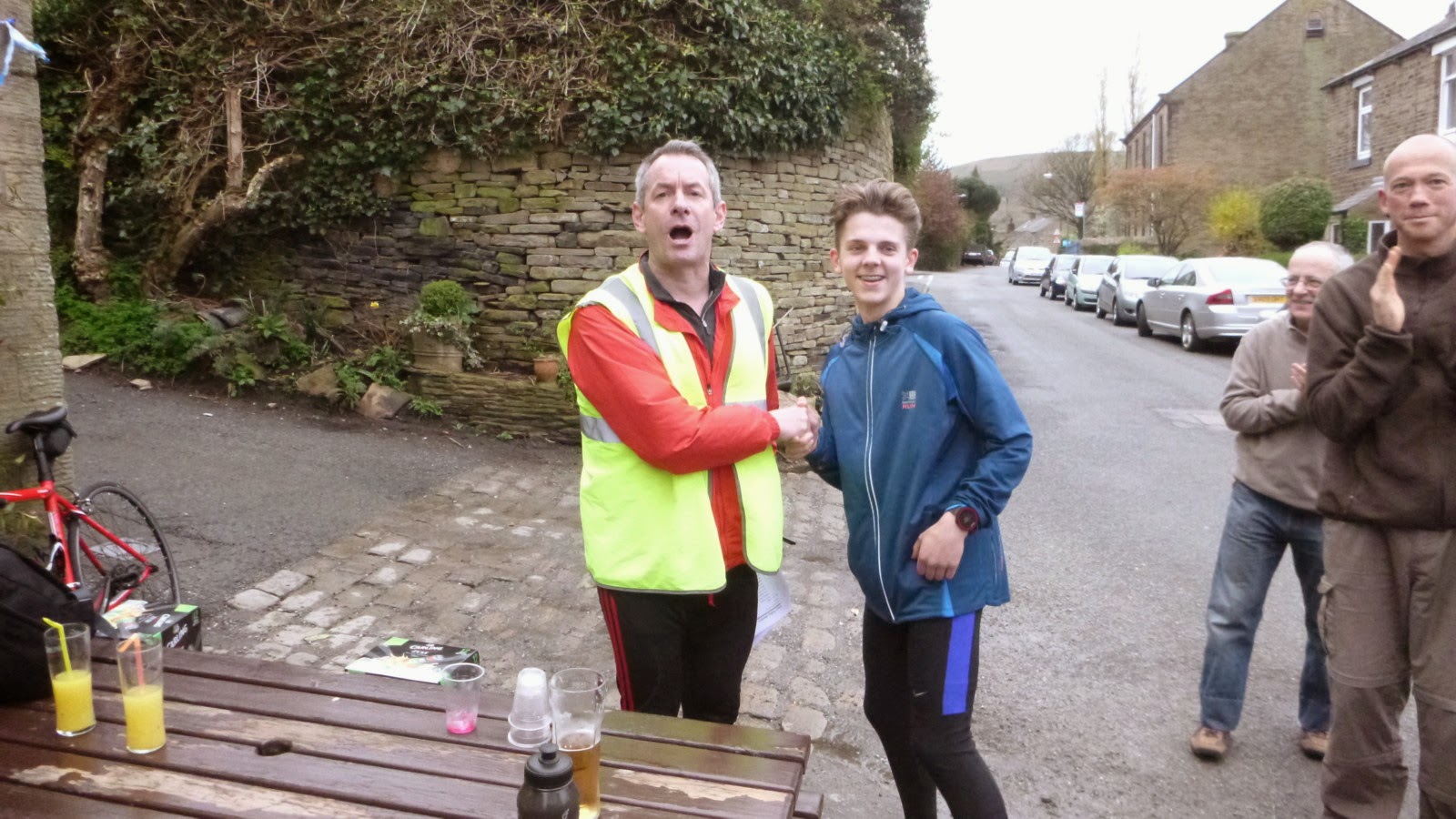 Winner 3rd year on the trot: 15 y.o. Alex Jackson of Stockport Harriers. He really had to work hard for the win this year.

High intensity with only one walking break mean only one in-race photo, but there are plenty of before and after. Full album is here.

Tomorrow's James' Thorn fell race promises to be spectacular as far as the weather is concerned. Another PB would be very nice.

I exceeded my wildest dreams. It was the usual intense suffering from beginning to end but it yielded a PB by 3 mins 22 secs! I don't know where this speed is coming from but I like it a lot and I want it to continue. Beginning with Herod Farm hill race on Wed 15 April (first evening race of the season), every race I've completed has given me a PB (Fellsman DNF excepted of course). That's an 8-race unbroken record, and counting. Next races are Rainow 5 fell race on Wed eve, Buxworth 5 road race on Thu eve then Marlborough Downs Challenge 33 mile trail race on Sunday.

Back to today. The weather rewarded us with its usual sunny warmth. Conditions could not have been better for the slog up to the top of James' Thorn hill and back down with the small loop at the top to avoid the worst of the clashes between the leaders returning and the rest of us still climbing. Race winner Simon Harding of Macclesfield Harriers was too fast for me to get the camera ready. I think the first three passed me on the way down before I began the anticlockwise loop to the top.

On the downhill I was a bit spent from the climb, but with the runners I overtook on the climb I only lost 2 places on average. Final time was 43:02, placing 46th out of 111 finishers. Not so long ago I struggled to finish in the top half of a fell race. Now it's happening every time. 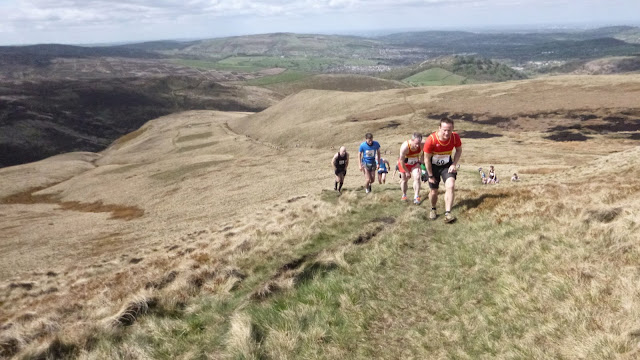 A rare backward-looking photo on the climb. 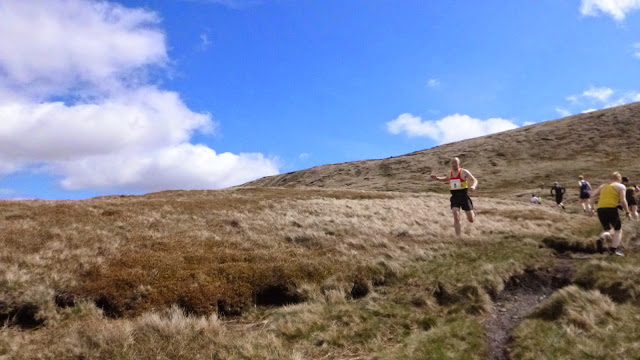 Number 2 Ian Mills powers back down. 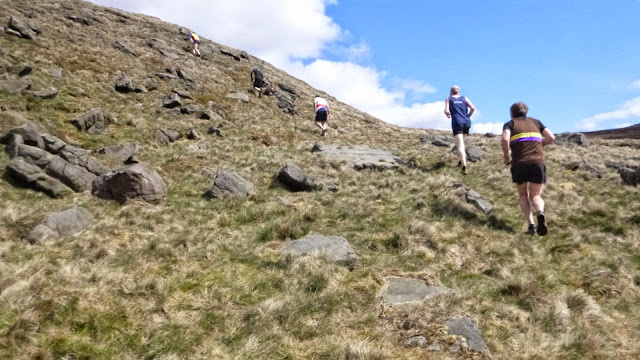 Approaching the summit from round the back. 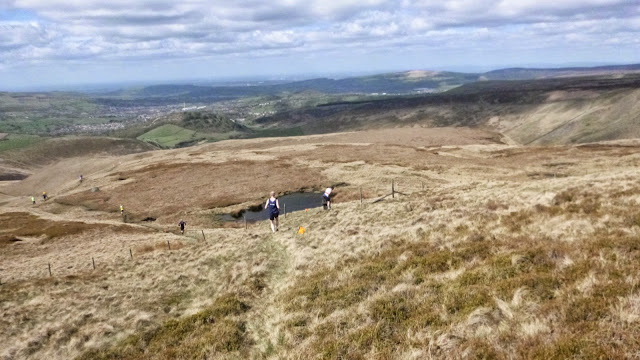 Downhill (almost) all the way to the finish. 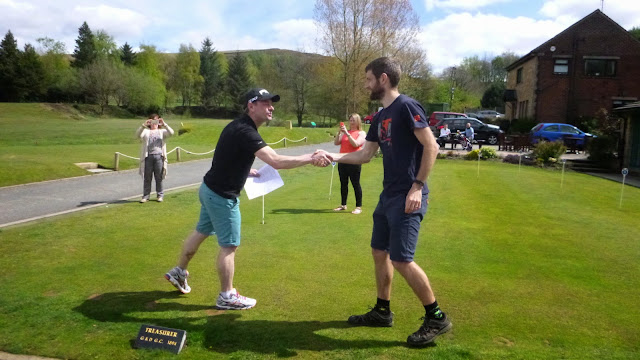