I've had two weekends off the ultras to build up my strength for a serious biggie next weekend. I have run my local Parkrun 5k at Bramhall Park for a couple of weekends. Last weekend's effort was poor (22:21), so I resolved to run to work every day last week in the expectation that I would improve this weekend. I did; I squeezed out 21:50. It wasn't a PB but at least I broke through the 7mins/mile pace, just, and I felt fit and well after the cycle there and back. Consider it a mini duathlon.

The UTMB starts at 6:30pm next Friday, 28th August (5:30pm UK time). We are allowed 46 hours to complete it. I would hope to do it within 36 hours if my body doesn't fail me, in which case I would finish by 6:30am on Sunday. I understand you will be able to follow the thousands of participants live on the website. Please follow my progress and send me good vibes. I'll need them after the Western States debacle. I fly out on Monday to acclimatise (we exceed 2,500 metres altitude during the race).

Long Tour Of Bradwell
A warm sunny day was in store as 70-odd runners slowly gathered at Bradwell sports club, complete with hat and gloves as per the kit requirement (fortunately we didn’t have to wear them!), ready for 31 (actually 32) rigorous miles up, down and around the Hope Valley and beyond. Our route would be punctuated by 18 electronic dibbing points to keep us on course. Once registered and issued with our Sportident timing chip ‘dibbers’, we mixed and mingled casually, chatting and soaking up the sunshine before being encouraged to make our way to the start.
We wandered up from the sports club to a safe massed start point on a lane. At 9am we were set off on a compact route that contained elements of the Bullock Smithy Hike, High Peak 40, Peaker’s Stroll and Chatsworth Challenge, among others. The optional early climb out of Pin Dale was a hands-and-feet job with high risk of slipping back down, but it was worthwhile because those of us who took it gained a good few seconds on the people who followed the easier track that zigzagged to the top.
The descent down Cavedale was predictably treacherous. Most people slipped at least once on the wet limestone polished smooth by thousands of feet. Descending is definitely the most risky. I ran down there very gingerly.
The day was really heating up as we climbed up to Hollins Cross. Then there was another rocky descent down towards Edale. A footpath cut across the fields to emerge at the top of the village.
The second big climb took us onto the edge of Kinder and the Druid’s Stone, formed like a toadstool. From there the route was taped, thankfully, to lead us across the heather and down to the drainage valley that led us directly to the Youth Hostel. Then came another traverse of the valley we had previously crossed to Edale before the climb back onto the ridge at Back Tor and left up Lose Hill. The sun beat down as we passed the recreational amblers and standers. The breeze on top was welcome though all too brief because we were immediately off down the hill again towards Killhill Bridge.
The route then took us up via Aston and around Win Hill to Ladybower Reservoir of Dambusters fame. Most appropriately, as I climbed out of Aston a Lancaster bomber flew over from the direction of Ladybower towards Hope behind me. It was not going very fast and the drone of its four Rolls Royce Merlin engines took a long time to fade away in the calm summer air.
The reservoir was soon in view and I took the out-and-back descent via another checkpoint to cross the dam to the next checkpoint and another water fill-up (there had already been several, for which I was very thankful, given the heat). I could still feel last weekend’s miles in my legs and they were feeling heavy already, with only 17 miles done. I was plodding more than I should have been doing. Those fitter than I (including ones who had done the Lakeland 50 or 100 on the previous weekend) were well ahead and out of sight from the outset, so I had no reason to be ‘off the boil’. I just got on as best I could, keeping the food and drink going in and taking in the views.
The next climb was a long one up country lanes to circumnavigate this year’s rampant bracken that had obliterated the paths we would have taken. It skirted Bamford Moor and took us onto Stanage Edge. On the climb up I missed checkpoint 13, as did many others. It wasn’t in an obvious (our assumed) place, but it was in the only place it could have been, as explained by the conscientious Race Organiser afterwards.
From Stanage Edge and the checkpoint at Upper Burbage Bridge came more interesting navigation down the valley to Burbage Bridge. The checkpoint was soon found, tied to the tree after the bridge and road crossing (I wasn’t going through that river tunnel). Continuing the gradual descent beside the stream brought us among scores of day trippers, walkers, picnickers and children paddling in the stream. It was a typical, old-fashioned British summer scene. At the next footbridge and path crossing, I was pleased to see the occasional tape markers showing the way to the right across Lawrence Field above the woods on barely discernible paths through the bracken. With the aid of the tape, navigation went well as I descended through Bolehill Wood, through the relics and evidence of past quarrying activities now well camouflaged by nature. A jog along the river brought us to checkpoint 17 at Leadmill Bridge (27 miles) and another welcome refreshment stop.
Now with only 5 miles to go I wanted to run; I tried but couldn’t sustain it. I was in survival mode. I plodded the ups and intermittently shuffled the flats and downs as best I could. By Abney, the finish was getting close but it was still uphill, so still I plodded. Finally, the left turn off the track over the stile brought me towards the paragliders and the top of the ridge. Hope Cement Works beckoned me home, and fortunately we didn't have to go as far as that. I shuffled down the hill and along the roads of Bradwell to finish in 8:04, which is probably half an hour slower than I should have done on this route. It leaves plenty of room for improvement and a nice PB next year in the second running of this event (this was its inaugural year).
I shall return, since this is among my favourite running countryside. I hope the photographs communicate its beauty.
That's 9 down and 3 left to go. The year's marching by quickly.
Posted by Nick at 21:18 1 comment: 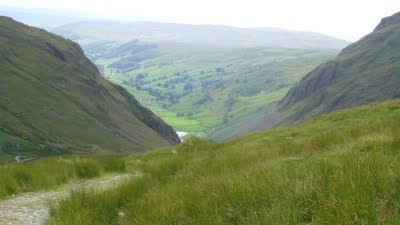