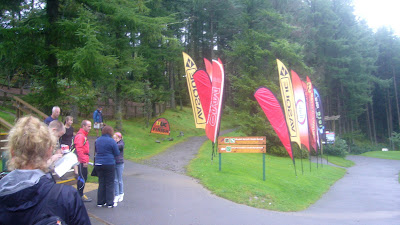 Pumlumon Challenge
A small but perfectly formed group of athletes gathered at the Nant yr Arian Forestry Centre for the 10am runners' start. Despite the field being more competitive than at any time in the event's history, with the record sure to fall, the atmosphere couldn't have been more low-key or laid back as the group ambled almost reluctantly in the general direction of the invisible starting line just seconds before the 'Go' command from Wynn.

This year we would not be blessed with the warm sunshine and dry conditions of the previous two years. However, the heavy overnight rain had thankfully moved away to leave windblown cloud wrapped around the hill tops. The final showery burst passed over shortly before our release into the Cambrian Mountains.

Of all the Runfurther races, this one ranks alongside The Fellsman as being more of a fell race than a trail race. A lot of it is off-path. Even if there is a footpath marked on the map, the reality on the ground can be very different. A tussock-'n'-bog trip-fest can be more the reality. There are two major climbs – Plynlimon / Pumlumon Fawr and Drosgol. The climbs and off-path nature of the event result in slow times for 'only' marathon distance. This year's wet underfoot conditions would not have helped. Furthermore, the route was slightly longer due to a re-route around the road and track to Checkpoint 2. The usual route along the 'footpath' (at least on the map) around the fell was deemed out of bounds, apparently due to some 'spooked' cows.

With the racing snakes well and truly out of sight way ahead, I settled into my usual survival pace and my rightful place in the bottom half of the competitive field, with other runners slowly overtaking me or me occasionally overtaking them. I was hoping to pick better lines this year (races like these involve a lot of luck, practice and prior knowledge in knowing where the most runnable, or even walkable, terrain can be found). I succeeded after Checkpoint 4 after the descent from the source of the River Severn, and on the northern bank of the Nant-y-moch Reservoir. However I made a worse job of it on the descent to Nant-y-moch, circumnavigating the final hill, Disgwylfa Fawr and upon leaving the final self clip at the flooded gate, despite this being my 4th Pumlumon. We are always learning. Getting it right can take years of practice. I shall be better informed the fifth time around in 2011.

I was pleased to see the return of the toffee waffles this year after their unexpected and disappointing absence last year. They brought an altogether more positive aspect to my experience as I looked forward to restocking at the refreshment stops. Also, the fact that I wasn't fighting illness this year might have helped with the more positive attitude.

This was one of the more rare events when I ended up running and finishing with someone with whom I had been leapfrogging for many miles. Tony Wimbush and I ran the final third and crossed the finishing line together in 6:06. It was nice to have some company.

I wouldn't have minded a sub-6, or even a PB, which would have required sub 5:53, but I can't expect a PB every week. It was still a second best, so I shouldn't complain.

The top times were spectacular, given the terrain. Jon Morgan and Ben Abdelnoor finished equal first in 3:56:41. The record had been duly smashed. Third was Stuart Mills (Lakeland 100 winner) in 4:02:25. First female was Kate Bailey in 4:30:54. Second was Nicky Spinks in 5:06. (Nicky was first female in the Grand Raid Pyrenees 100-mile mountain race two weeks earlier.) Third was Jayne Angilley in 5:33. Nine gold medals were earned for times faster than 5 hours. This is the highest yet.

After the race we lounged on the deck of the outdoor centre to eat our food (possibly the best service yet with the runners catered separately from the public in the café). We did a bit of 'twitching' – watched the wild birds swarm to the feeder that hung close by, and the red kites swoop and soar over the lake close to their feeding point.

There are only 'before and after' pictures this time. Unfortunately I took no pictures out on the route, electing to keep my camera covered during the run because of the dampness, but mostly because I was getting on with the job or perambulation.
Posted by Nick at 12:45