Only 2 years overdue, here's a completed draft from 2014. Enjoy the memories.

May is the month of serial compulsive fell racing, with back-to-backs, evening and weekend races, all short and intense. If Saturday mornings are free I would do the parkrun as well. I have found that keeping the body on the boil like this increases speed, maintaining or even reducing race times as I advance through my early fifties. I even got my first ever mentions in race results in 'The Fellrunner' (the FRA magazine). Many fell runners aspire to getting their name in the Fellrunner results, especially slower ones like me. Age sometimes has its benefits.

The end of May always brings one of the main highlights of the year - the annual 100 mile event of the Long Distance Walkers Association. This year it would be based at Pontypool and would take us on a journey through the valleys of South Wales. 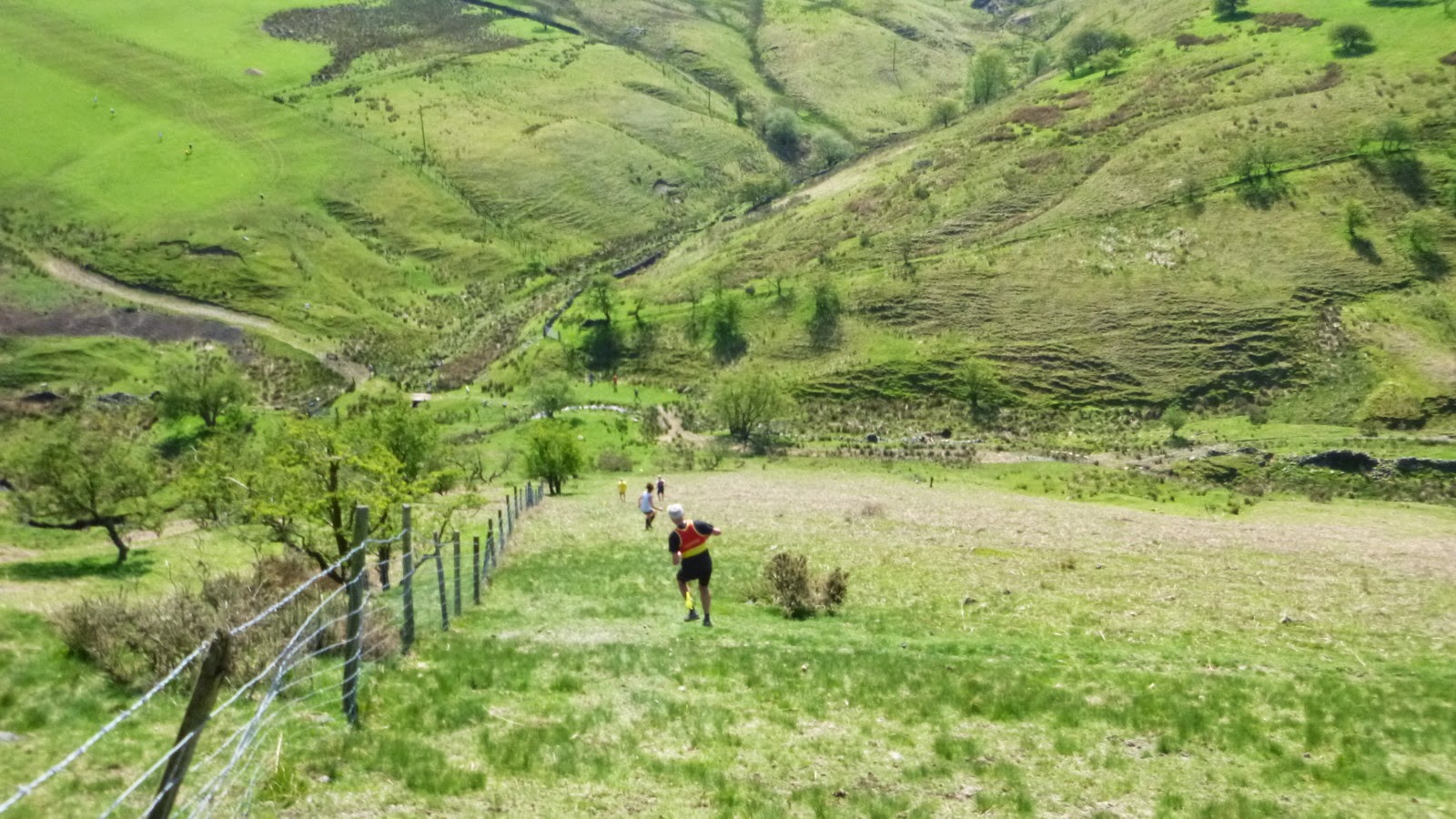 Final descent before final climb to the finish.

Three and a quarter very steep miles from the Grouse Inn between Hayfield and Glossop on a beautifully warm, sunny day. Conditions underfoot were exceptionally dry. I was pleased to get a PB considering all the walking I had to do (a lot of it is too steep to run and even then you're blowing out your a***e). I rewarded myself with lunch at the Grouse, eaten outside of course. Photo album. 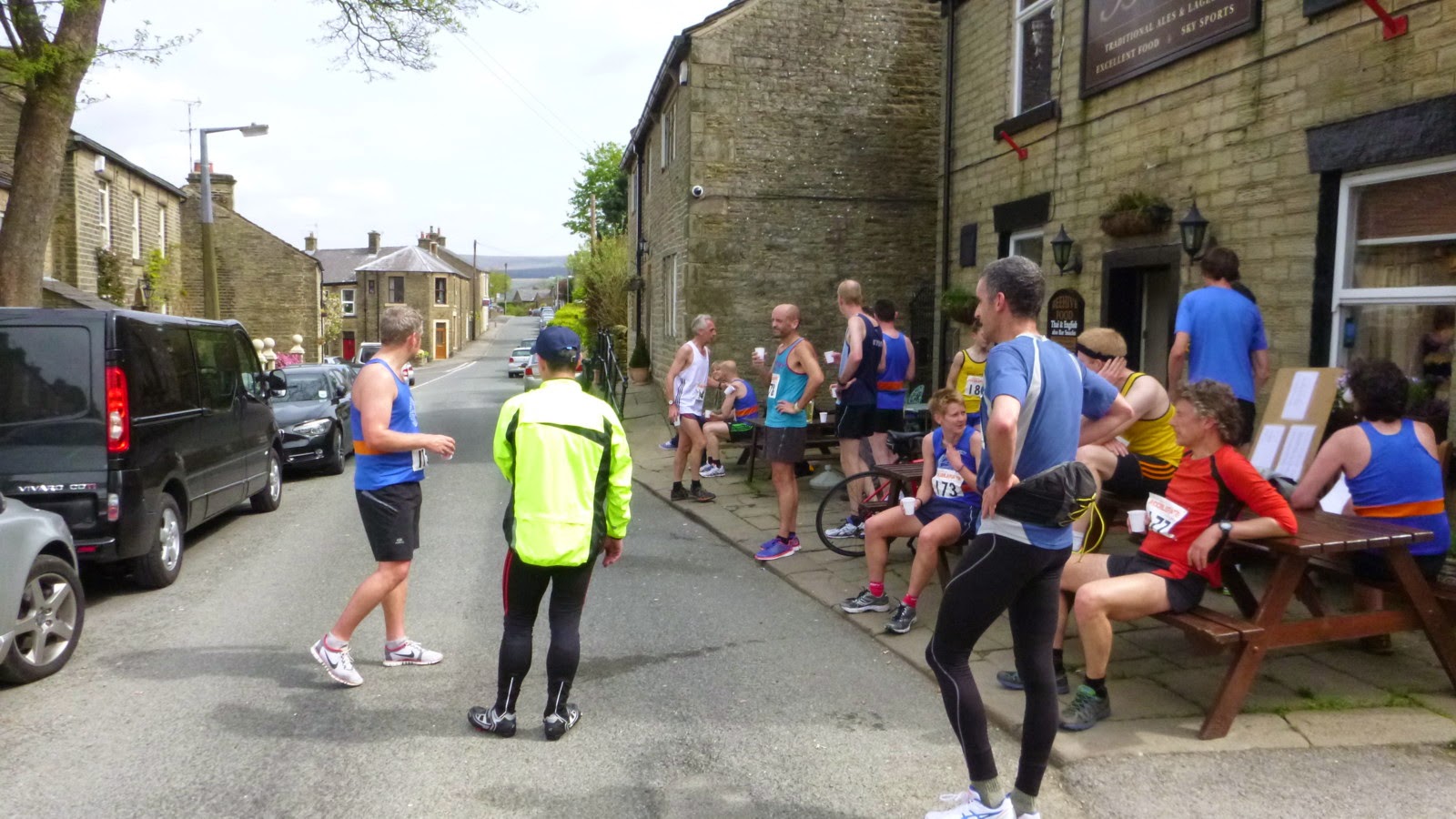 Waiting at The Beehive for the next finishers.

This is a hilly circuit on country lanes from The Beehive pub in Glossop. 6 seconds outside PB this time but I still rewarded myself with al fresco lunch at the Beehive afterwards. Photo album. 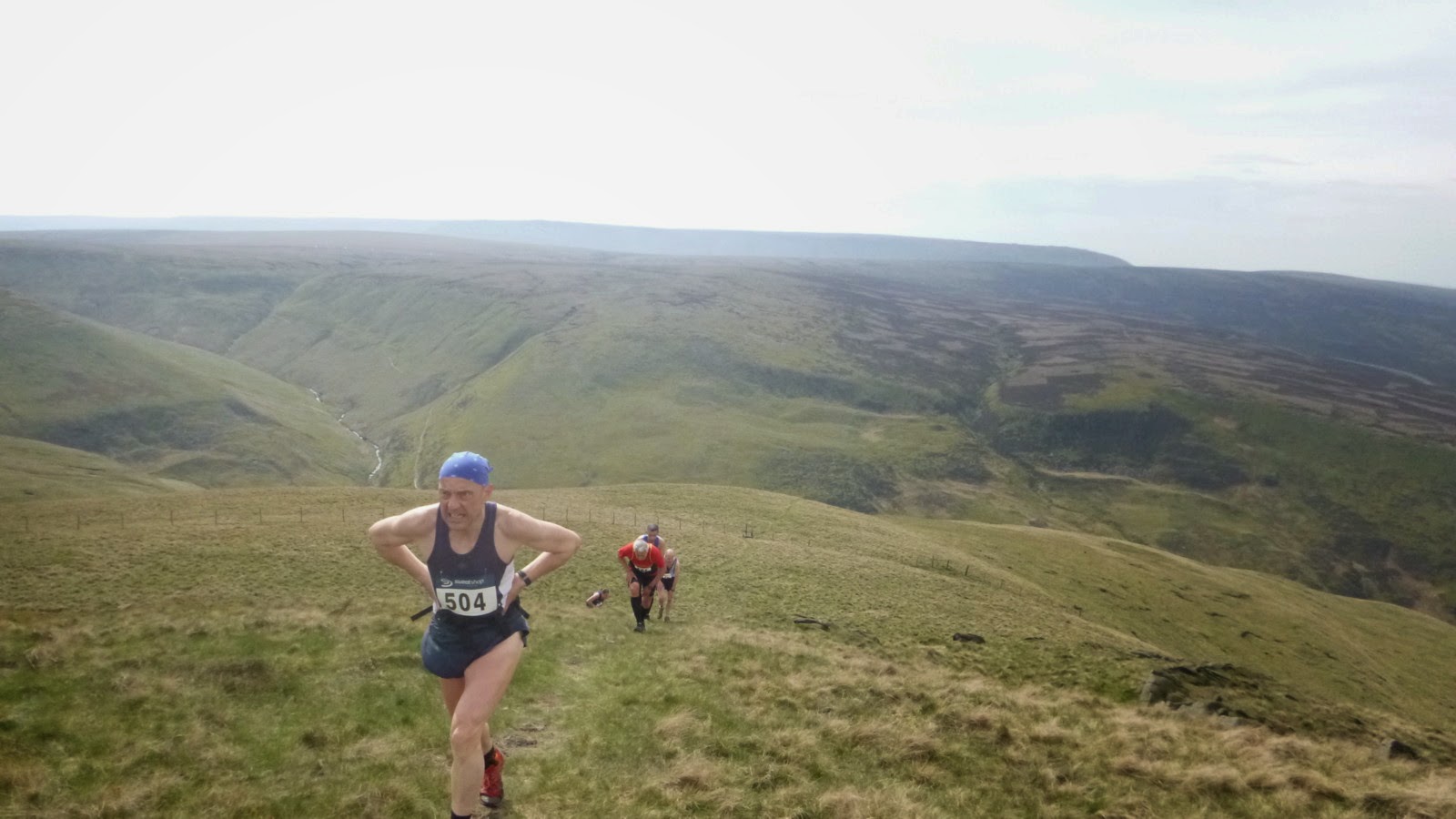 This 5-miler is a tough out-and-back with a loop at the top to climb and descend James's Thorn. I was very annoyed to go off-route at the top. With half-dead brain due to the intense effort and thanks to removed marker flags, I made the mistake of following runners ahead instead of veering left, turning what should have been a PB into a PW. It was a grand day for a detour, though. Photo album.

Five miles on steeply undulating country lanes from the Navigation Inn at the Bugsworth canal basin. Heavy rain storms abated just in time for race start. This was my first time at this race but I seemed to do surprisingly well compared to other familiar faces around me. Perhaps the back-to-back fell races were already doing some good. It enjoyed a big turnout considering the poor weather beforehand. No photos this time due to the poor light.

Woodbank parkrun kept me out of mischief on the 10th before a brief trip to London intervened. 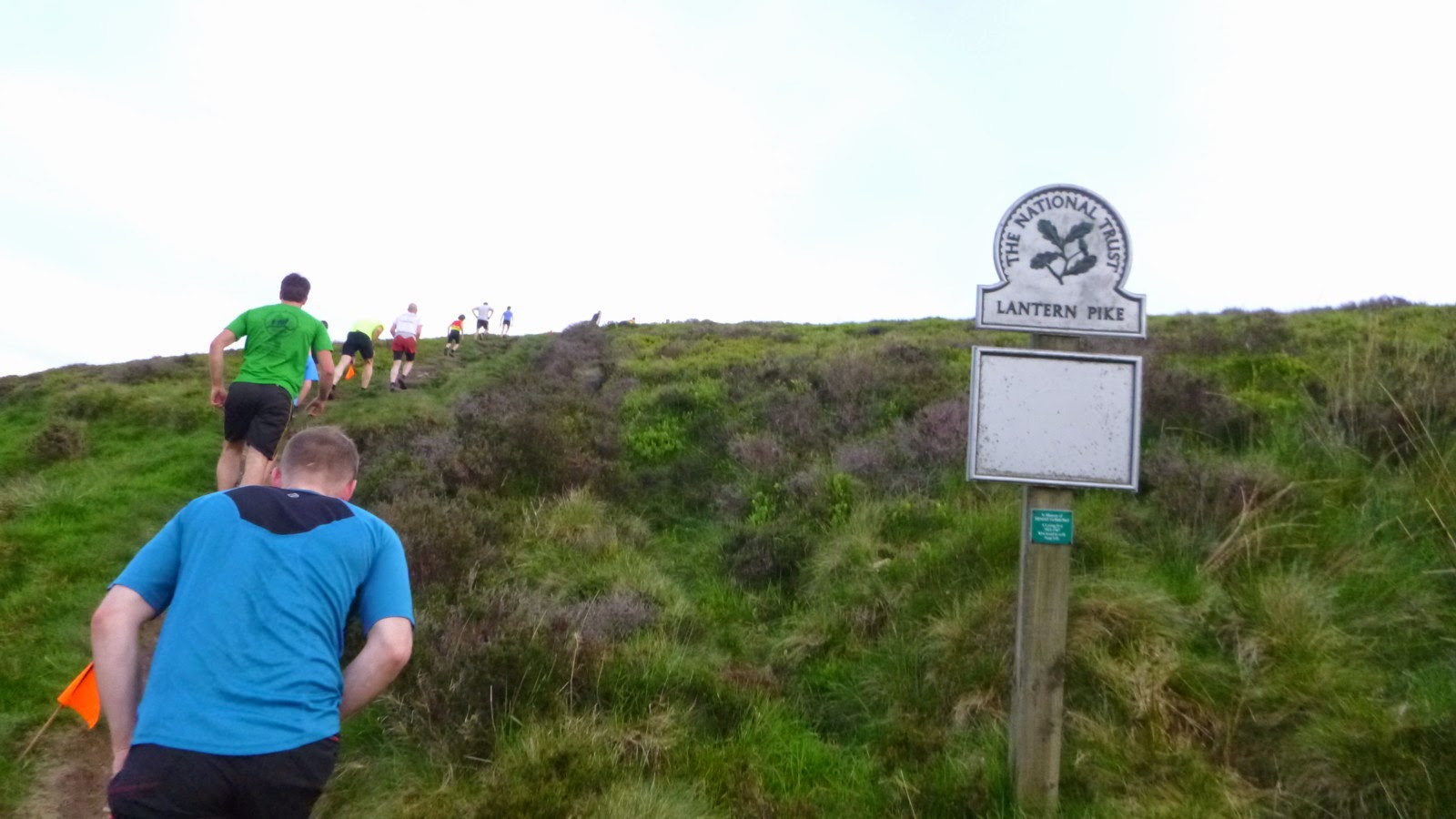 The weather was back to warmth and dryness for this intense 3-miler from Hayfield up Lantern Pike and back. This one's quite rare in that the children run with the adults. Many of the children beat the adults quite comprehensively. I was pleased to get another PB with 27:53. Serious speedster Andi Jones won in 19:36. Photos. 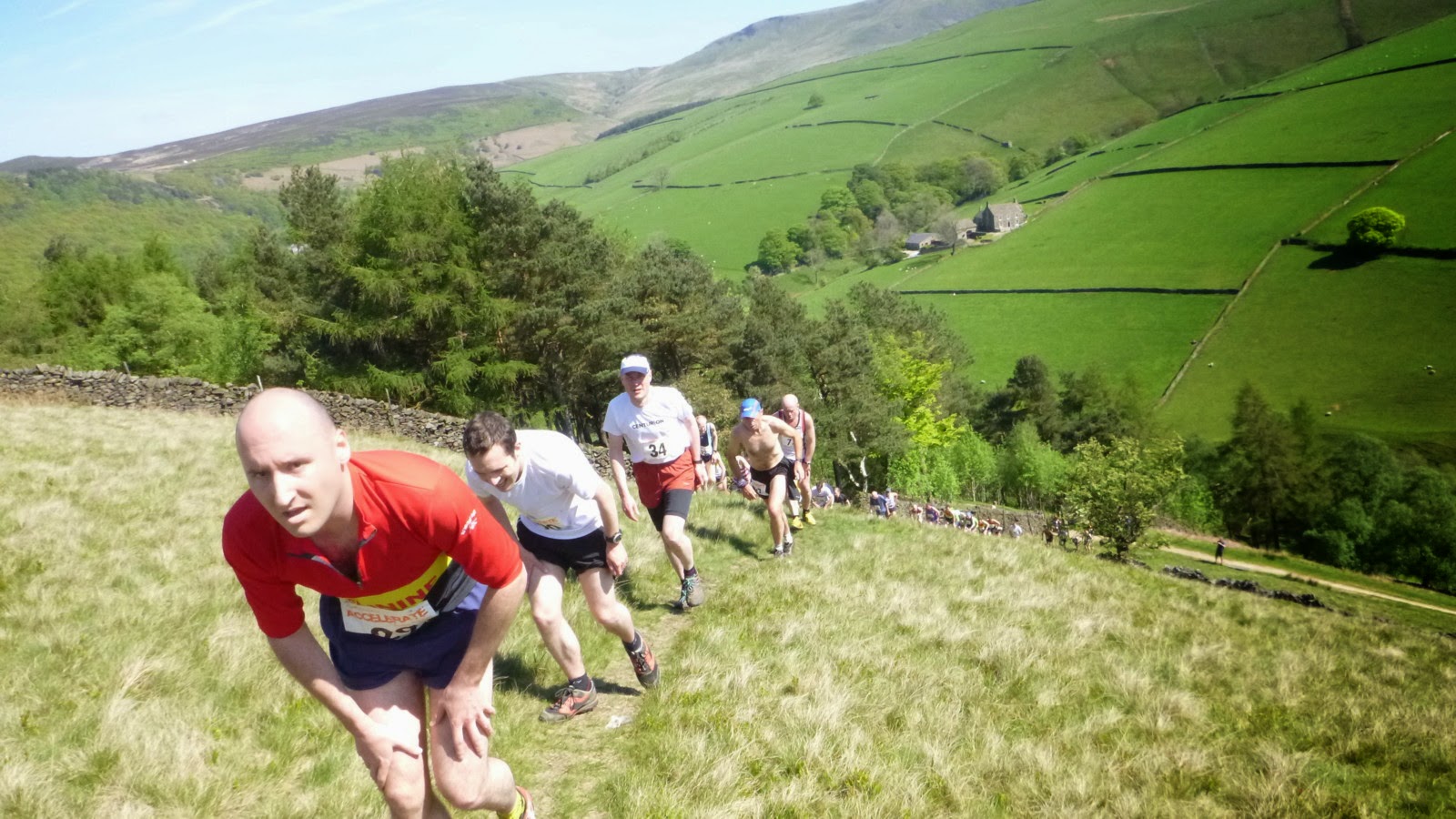 We descend to climb and climb to descend.

This is another one based from Hayfield. It is a serious undertaking. It's only 5 miles but it starts off as it means to go on - with a hands-and-feet scramble up Elle Bank. Every possible hill is climbed and descended, sometimes more than once. The day was hot, the sun was intense and clouds of large insects hovering in the breeze along the ridge made you scared to breathe properly because you'd ingest them. An insect down your wind pipe is not welcome when you're already gasping for air. Those are my excuses for being 3:15 slower than I was last year (final time 1:05:19). Photos. 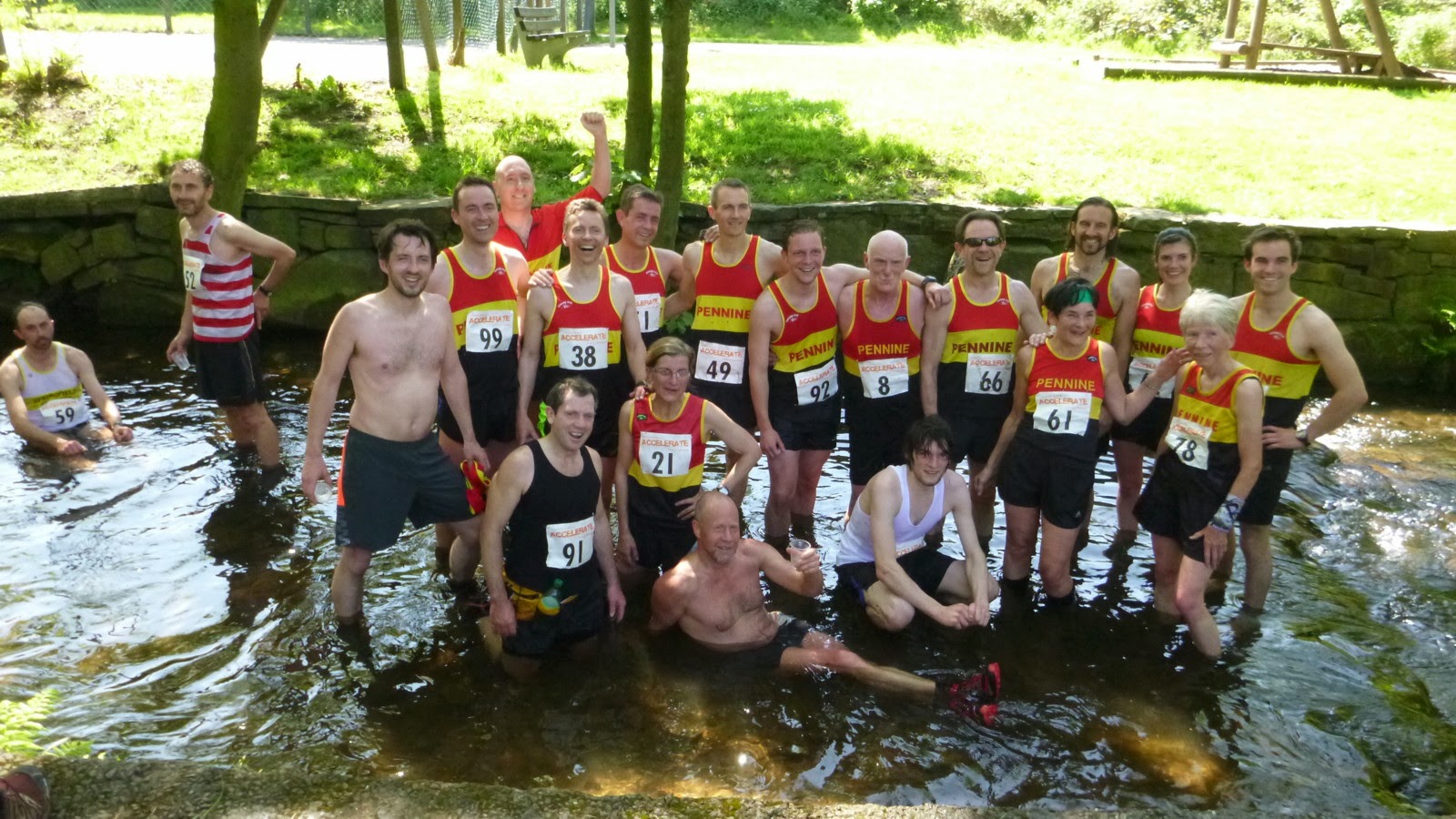 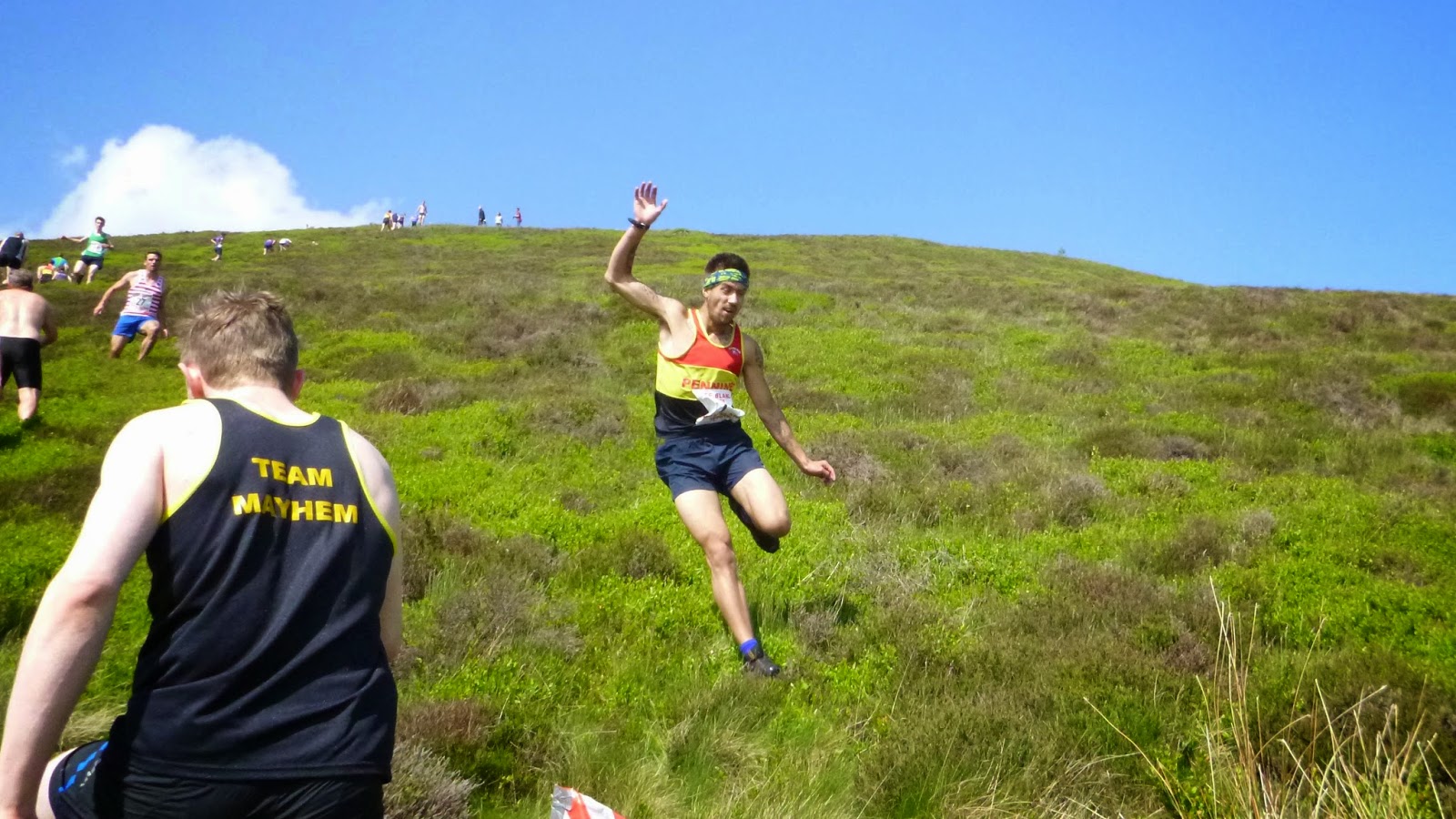 Winner Daniel Chan on his way back down.

1.2 miles intense burn straight up and down Lantern Pike's steep side from Little Hayfield. The sun shone gloriously once again but thankfully there was a bit more breeze to cool us down a bit. The out-and-back route provided ideal photo opportunities. Even though this is short and intense I took my camera and snapped away as I slogged my way to the top. A cropped version of the photo above of Daniel Chan in mid flight got printed in the Fellrunner magazine. I surprised myself how well it turned out considering my main aim was to race, not take photos. Photo album.

The weather had taken a turn for the worse down south (there was nothing wrong with it up here in the north west). A storm system had rotated lazily for several days dumping its rain on South Wales and other parts, and it would continue to do so during this premier event in the LDWA calendar. What had become uncommonly dry ground for that part of the country had been transformed into a swilling bog-fest that was even wetter than usual. Add to that no visibility of the valleys that had been expected for so long, race organiser David Morgan and his massive band of helpers felt understandably thwarted.

I drove down to Pontypool on the day for the 2pm runners' start, hitting the rain just south of Birmingham. We'd been given to understand in no uncertain terms that anything faster than a saunter would be forbidden on the normal 10am start under pain of being made to sit on the naughty step at the checkpoints until they opened. I was mildly thankful for this as I arrived in torrential rain. Surely it would ease by the time we would start?

We registered in the school hall at the bottom of the hill where we would be sleeping after the event. The place was a dump. We had a choice of toilets in different locations and not one of them was serviceable. Most had no lock on the door, some had no toilet seat, some had no working lights, most had no toilet paper or soap, one was blocked and overflowing. Get the picture? I dreaded to think how hundreds of us would manage after the event. I needn't have worried because we would finish and get fed in the new building at the top of the hill, whose facilities were luxurious and faultless in comparison.

The rain had eased to a light fall by the time we started but full waterproofs were still the order of the day for warmth and comfort. Water flowed everywhere. An already tough route would be made even tougher. The rain would continue to a greater or lesser degree for a further 24 hours before sunny interludes would be punctuated by further showers. There would be no escape.

Because of the dire conditions I could quite happily have retired at the first and second checkpoints. Everyone I spoke to expressed the same feelings that I had; they weren't enjoying it one bit. Revelations just learned back home swirled around my head and increased the urge to give up. My heart just wasn't in it. However after the third checkpoint at marathon distance I resigned myself to just getting on with it and finishing what I'd started. 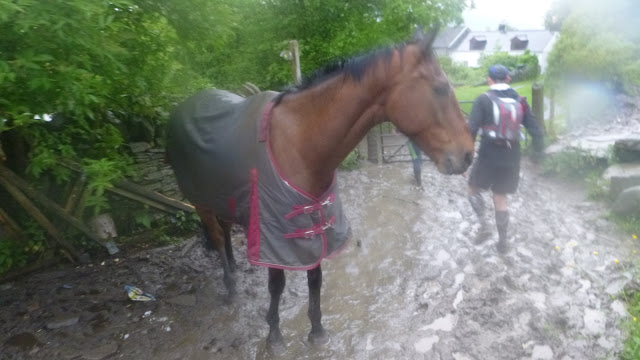 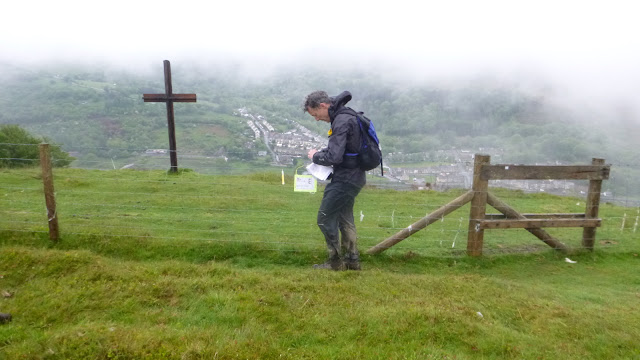 Sunday morning - deliver us from what we endure ;-)

We as participants just got on with the job of sloshing one foot in front of the other until it was all over, if we didn't succumb to trench foot first. Well into the second day on Sunday a steep rocky footpath descent that sometimes doubles as a stream had become a raging torrent. A hastily arranged reroute was put in place before nightfall to avoid the risk of walkers carrying on over the precipice. 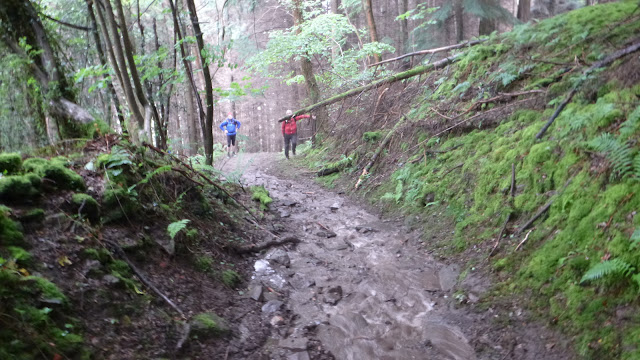 The precipitous torrent - heading down to the watery abyss.

On Sunday evening the 4 hour later start, combined with the hostile conditions, meant that I was just pushed into the second night for the first time on an LDWA 100; I rocked back into the school just after nightfall after 32 hours and 32 minutes of wet. I would have been OK going on the 10am start after all. Many who opted for the early start were hours faster than I was. I should have ignored the dire warnings. There are runners and there are runners. Some "runners" are slower than some "walkers" over 100 miles. Attempting to separate the two categories will always be futile.

Hardly surprisingly, the drop-out rate was one of the highest for an LDWA 100. I could so easily have been one of them were it not for the Magnus Magnusson mantra I apply in such situations: "I've started so I'll finish".