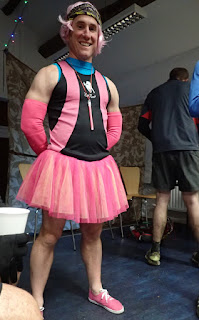 Lakeland 100 2015 rolled on by, where I ran in a pink tutu in honour of LittleDave Cumins, checkpoint captain extraordinaire at the Blencathra Centre. It was a strangely liberating and comfortable experience - despite the normal running attire underneath. ;-) It also served to mark the special occasion of my 500 mile award (five Lakeland 100s completed). Finishing time was 35:25:02 but that was after going backwards after Ambleside. After being on PB pace through the pub-goers of Ambleside with daylight to spare, the wheels well and truly fell off and the last 15 miles took me 8 hours to grind out. Night fell and sunrise returned during those 15 miles.

Dressing up by the checkpoint marshals has become a theme to add levity to the proceedings when the going gets tough. They compete to outdo each other. One or two runners give them a good 'run' for their money. L50 runner James Harris caught up with me as I left the Mardale Head checkpoint.

The full photo album can be found here. 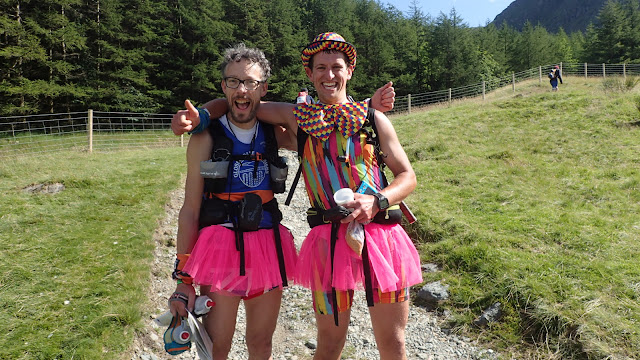 Nick and James at Mardale Head. 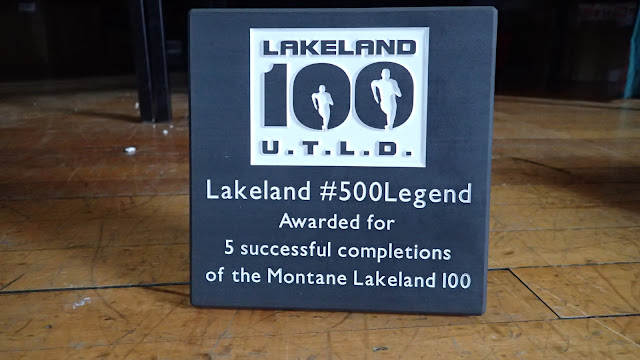 Then Lakeland 100 2016 was soon upon us alarmingly quickly, with a few PBs and PWs in between (more PWs of late as the year marches on). This would be my 50th race, 9th Ultra and 2nd Hundred of the year. I was set up for an easier pace with Stuart Blofeld. Stu had recently completed the Wild Atlantic Way Audax on his ElliptiGO bike, an awesome achievement, so he wasn't planning on going fast. I would tag along with him in an orange tutu this time (less of a clash with the running club colours, don't you know). The weather was perfect - not too hot and it didn't rain. We jogged along through a warm and sweaty night (a familiar scenario on the L100) into a new dawn on Saturday at Braithwaite. The diversion after Blencathra due to the washed-out bridge had us bypassing the perfectly safe road crossing via the bicycle/pedestrian refuge to go 'round the houses' via the additional self clip to arrive back to where we could have been quite safely 10 minutes earlier. Jenni Cox, who was in our running group at that point, had her ear bent about 'elf an'safety nanny state gawn maird'. 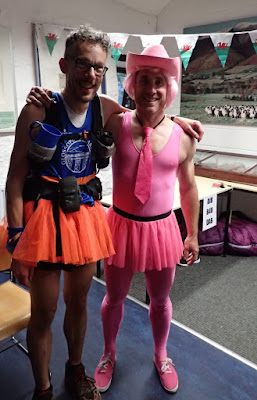 Shuffling our way along the wrecked coach road to Dockray (those floods really did do some damage), the midges were mercifully scarce this year. I can't imagine why. The long section to Dalemain saw us enter the estate just after the L50 runners had been released. They would be on their circuit of the estate. I felt compelled to run as fast as I could to reach checkpoint and drop bag sanctuary before the first L50 runner caught us. This was the best time to arrive at Dalemain because the support from all the L50 supporters was so uplifting. I think they were cheering the tutu though. We all made it with time to spare. As we sat in the tent and the L50 runners streamed past, a streak of pink signalled the passage of LittleDave Cumins. He had managed the Blencathra checkpoint once again through the night before shutting up shop and getting himself to the L50 start to run it in a blistering 11 hours. 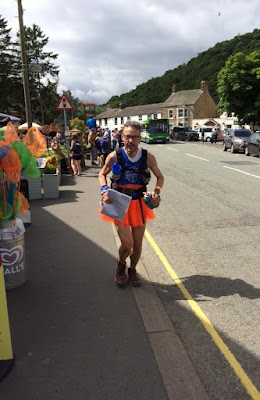 Suitably refreshed and re-socked to stave off trench foot and blisters, Stu and I were on our way to Howtown and beyond. As we ran through Pooley Bridge I was greeted by Mark Willet, who just happened to be walking along. I'm sure it must have had something to do with this most auspicious weekend. Great to see you, Mark.

We mostly walked to Howtown in the afternoon heat. I tried to run a few times but soon gave up. Walking was definitely on the menu. 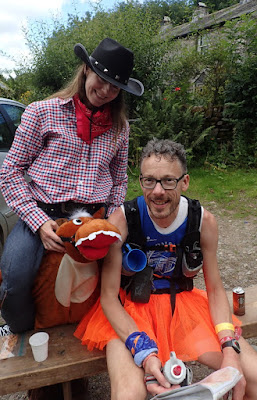 The hillbillies and cowboys at Howtown were really uplifting. This is essential at this stage, where we L100 runners are experiencing the suffer-fest. It's probably the heat of the afternoon taking its toll. When we arrived I was taken aback by ".... is all we've got left" ending the description of available comestibles. Surely we're not that far back down the field? Nevertheless, suitably refreshed (I would never have known), Stu and I plodded our way up Fusedale past the false summit to the ultimate high point at High Kop. From there we should have been able to run down to Low Kop but the legs were having none of it. I plodded, bringing up the rear.

The descent to Haweswater continued in the same vein until my left knee began to protest with alarming ferocity (strange, since it's always been the right one that's niggled the most for the past 7 years or more). By the time we reached the interminable 'path' beside Haweswater I couldn't load the knee at all. I'd already downed some Ibuprofen, which had done nothing for the pain. Stu offered a couple of Paracetamol. I'd not tried those before under such dire circumstances but I was willing to try anything. As I struggled along the minor descents over the next hour, standing and wondering how I could negotiate them and manage the pain, I realised that the Paracetamol were doing nothing either. The pain just got worse. I was crippled to a standstill. Tears of anger and screaming frustration welled up. There was no way I'd be able to manage the final 29 miles of ascents and DESCENTS after Mardale Head if a simple step down caused so much pain. Even walking on the flat and uphill was getting painful as I dragged in to Mardale Head at 75 miles, the most remote checkpoint where I would never choose to withdraw, no matter how bad things were. Trouble is, I couldn't walk any more. 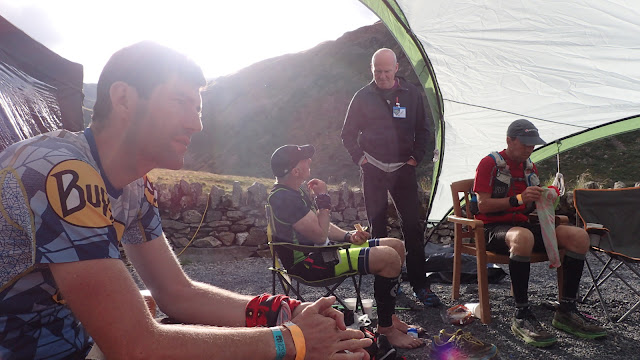 Mardale Head: Stu would continue, I would stop.

I asked for a medic to give me a once over. She tested for quad tightness, leg flexibility, any signs of pain with passive bending of the leg. Nothing. I was in good shape. Yeah, right. Try active bending of the leg. Get me to walk down a step, a gentle slope and you'll soon know about it. My Sportident dibber was unceremoniously hacked from my right wrist and I was officially retired from my 6th Lakeland 100. Stu had stuck with me dutifully as I dragged in to Mardale but he was now free to continue without external impediment to his first L100 finish. Thanks Stu for your company and support while I wallowed in self pity.

I realised afterwards that I should have offered him the tutu to continue its journey to the end. Perhaps I saved him from embarrassment by not 'thinking on' and foisting it upon him. I sat in the checkpoint drinking tea and soup and eating sandwiches provided by the caring marshals. I'd been cooking a load for a good few hours by now so I seized the opportunity of my retirement to have a relaxing sit-down and add to the pile in one of the two well-used Portaloos, still toasty from the day's unbroken sunshine. Flies tickled my bottom as I relaxed and pondered my ignominious situation. The fact that I have to use such facilities these days on a Hundred tells me how well I eat compared to years ago, when the need never arose until well after the finish.

After returning to the checkpoint I soon began to shiver in the rapidly cooling evening air. A frigid night was in store. A marshal suggested I board the retirement bus ready for the next departure after dark. Very soon I couldn't bear to sit in a seat with legs screaming with pain as they began their recovery process. I had to get out and walk around to get some relief. I was shivering uncontrollably. A kindly marshal offered me a place in her car as she was about to return to Coniston. Another needy retiree joined us. Oh the joy: I could sit with legs outstretched. On the way we did a circuit of Ambleside in the last remnants of dusk to cheer the runners on. I should have been right there right then, getting cheered at myself.

I made my first ever premature return to the school without announcement or fanfare, sidling my way in sideways hoping to go unnoticed; no medal, no T-shirt. I'm not used to this. The good thing was that Stu went on to finish successfully on Sunday morning after 38 hours and 15 minutes out there. 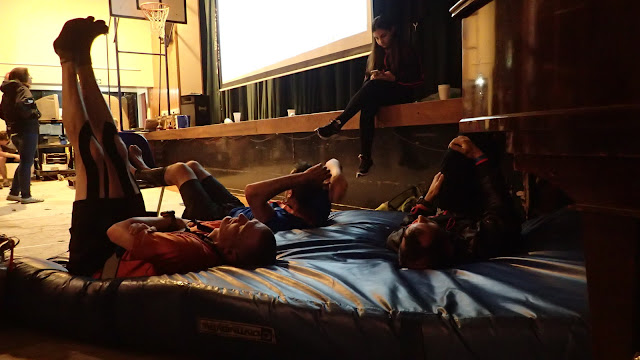 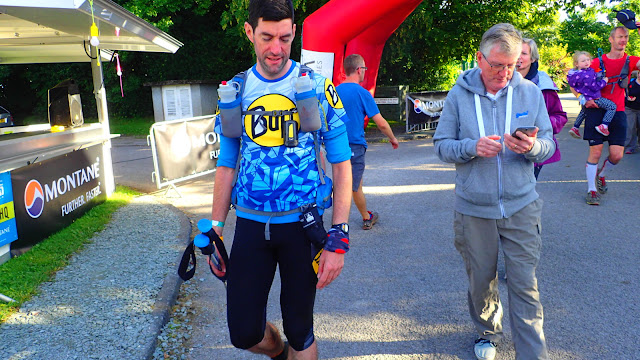 Stu took a video record of the event.